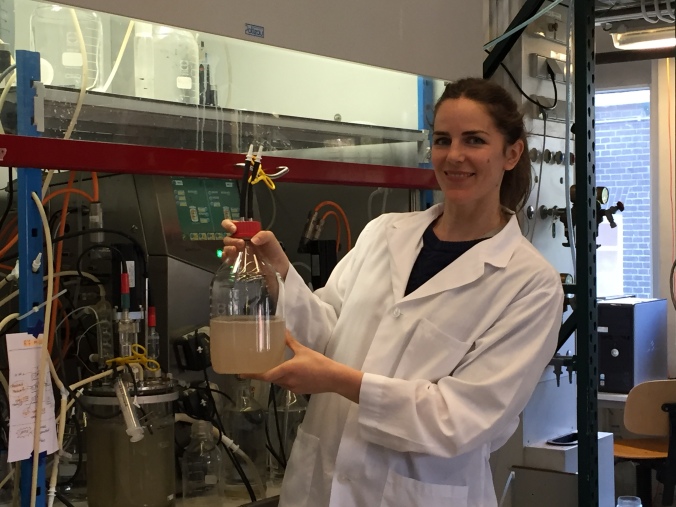 A turbid liquid is bubbling in a closed glass pot connected to tubes, pumps and sensors monitoring it’s vital signs. What sounds more like a patient at an intensive care unit of a hospital, is actually a bioreactor containing bacteria situated at the Delft University of Technology. “The bacteria we are cultivating and studying use N2O the same way as we do O2, for respiration” explains Monica Conthe, a PhD student and researcher studying these special group of bacteria “they are the only sink for N2O that we know”.

As carbon dioxide (CO2), nitrous oxide (N2O) is a greenhouse gas. The compound, commonly known as “laughing gas”, is increasing in the atmosphere since the beginning of the 20th century, when mankind started using chemical fertilizers to increase crop yields. The IPCC (Intergovernmental Panel on Climate Change) estimated the contribution of one molcule N2O to the greenhouse effect to be 300 times higher than one molecule of CO2. This compensates for the relative low concentrations od N2O measured in the atmosphere and explains why this gas comes more and more into focus of scientists. Unlike for CO2, we are just beginning to understand the reasons for the increase of N2O and prediction studies already called it the “greenhouse gas of the 21st century”.

Where does this increase in N2O come from? “This is rather complex,” says Monica, “as there are different microbial processes that can produce N2O and in some cases the mechanism by which it is produced remain obscure”. Traces of N2O are therefore naturally found in the environment.

With the application of chemical nitrogen fertilizers the input of nitrogen in natural environments has been increased. This disturbs a natural balance between N2O producers and consumers resulting in the emission of the greenhouse gas to our atmosphere.  “Some microorganisms produce N2O, but many others consume it” explains Monica. Instead of using oxygen like we humans do, these organisms can generate energy by “breathing” N2O. The end product of that consummation is N2, which is a natural compound of the air we breathe and a climate neutral gas.

Monica describes her research group as “microbe hunters”. In her case she is hunting bacteria specialized in consuming N2O. This is achieved by a natural selection from a starting material containing all kinds of bacteria.

If microbiologists want to isolate organisms which can grow on diesel or other pollutants, they “feed” a diverse community with the pollutant of interest. Organisms able to consume these compounds have an advantage over the others and grow and proliferate over time.

Monica applied the same principle by feeding her reactor with N2O gas and over time organisms able to breathe it were left over.  “We need to learn as much as we can about these bacteria” she explains further “since they are the only sink of N2O we know”.

A potential mitigation strategy to avoid emissions of this greenhouse gas into the atmosphere would be to favor the presence of N2O consuming bacteria in ecosystems where it is being produced. “Rather than trying to avoid it’s production, why not focus on favoring its consumption?“ The findings from the research at TU Delft can be used to develop strategies for N2O emissions reduction in natural as well as engineered ecosystems.

The outgoing gas streams could be conducted through a bio-filter containing Monicas N2O breathing bacteria to clear it from the greenhouse gas before it exits to the atmosphere. The same principle can be used in other industries where N2O in off-streams is present, like in nylon production.

The bacteria grown and studied in the big glass pots of TU Delft are not the only example where nature provides us a solution for an environmental problem we face. “The tools are out there” Monica Conthe finishes our tour through the lab “we just have to figure out how to use and apply them.“